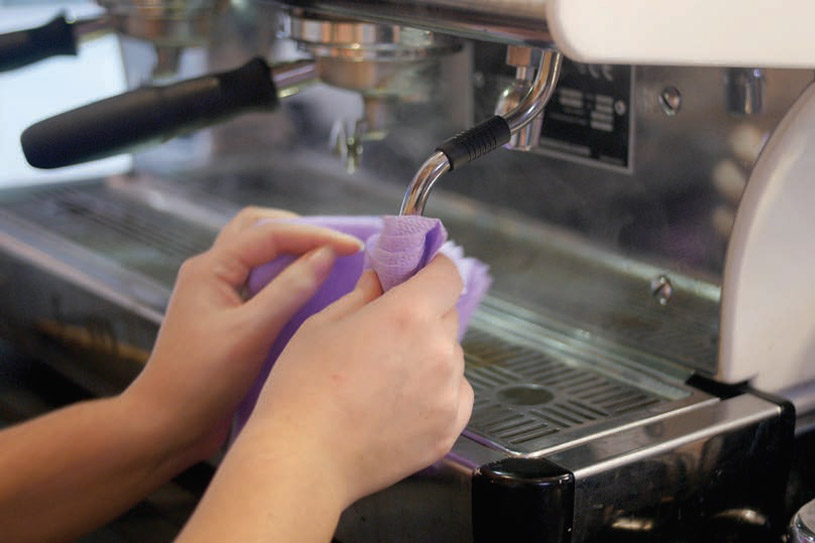 The most delicious tasting cup of coffee is one produced by a spotless coffee machine. James Taylor of Chicopee outlines a regular cleaning regime for coffee machines.

There’s nothing quite like a cup of good coffee and the UK is fast becoming a nation of coffee connoisseurs. Although we still have a long way to go before catching up with the levels of coffee consumed by the French (twice as much as the Brits), the UK coffee shop market recorded a 6.4% increase in sales in 2013 and a staggering £730 million was spent on coffee in Britain last year.

Central to this coffee heaven is the professional coffee machine relied on by catering companies, hotels, cafes and bars to provide a sophisticated menu of caffeine hits – from skinny lattes to a comforting cappuccino.

Keeping these machines clean can be a tricky task but is crucial to ensure coffee is served at its best. Coffee beans contain essential oils which are responsible for the rich crema that tops an espresso but they can also leave behind a film that quickly develops a rancid taste –and the steam wand which conjures up that warm, frothy milk is potentially a rich breeding ground for bacteria.

An efficient cleaning regime will not only ensure a premium taste but should also keep your machine running more efficiently for longer.

After each use the steam wand should be purged and wiped off with a damp cloth or towel. The coffee shower screen should be cleaned at the end of each session and each task should be allotted a dedicated cleaning towel to avoid contamination. The exterior of the machine should also be wiped down.

A more detailed cleaning of the machine, wand, portafilter and basket should be carried out each week using specialised detergent according to the manufacturer’s instructions, to flush out oils and grind deposits. Follow this up with a thorough rinse with clean water. Stay away from dish detergent which can leave a residue and affect taste by lingering and destroying those essential oils. Remember to purge the steam wand after cleaning by opening the steam valve and venting it into a container for about thirty seconds.

Wiping the steam wand after each use means potential contact with a blisteringly hot surface, which could lead to the very real peril of being burned. This can now be avoided thanks to a new cleaning towel launched by Chicopee.

The Chicopee Coffee towel, designed specifically for coffee machines, is heat resistant up to 250 ̊C and proven to be stronger than traditional wipes and cloths, allowing users to clean machines thoroughly and quickly without burning their fingers. It is 30% more durable and can absorb up to nine times its own weight.

The towel’s microfibre structure, approved by the German test institute ISEGA for use in food handling environments, gives good bacteria pick-up and can be machine-washed many times over without losing its cleaning properties.

Cleaning your machine and brewing the best tasting cup of coffee just got a lot easier!