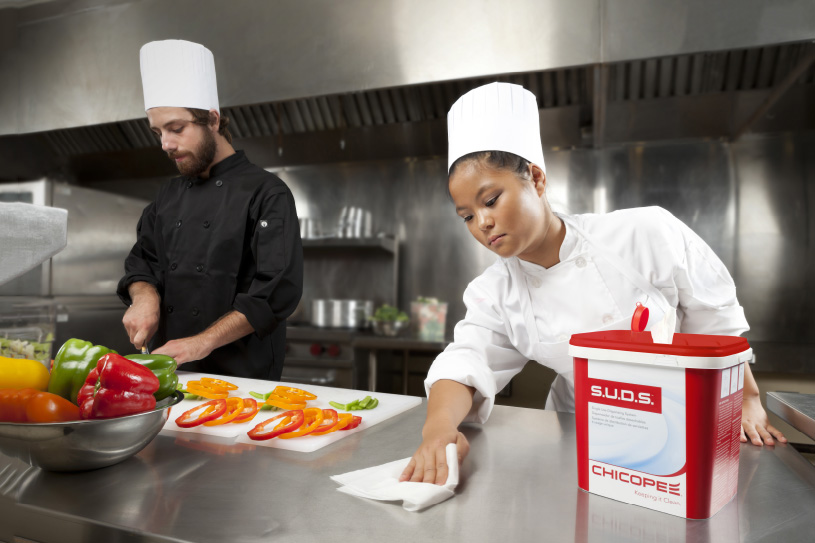 To prevent the spread of norovirus, the CDC recommends frequent cleaning of kitchen surfaces, objects and equipment using EPA-approved chlorine-based sanitizers designed to eliminate norovirus. The restaurant industry promotes a two-step process for sanitizing surface areas — wiping once to pick up dirt and particles and a second time to apply sanitizer. But specialized sanitizers and strict sanitizing protocols may not be enough to kill the stubborn norovirus microbes that live and grow on surfaces for up to two weeks.

Scientific studies have shown that fibers in standard cotton and paper foodservice towels bond with chlorine-based sanitizers, locking in 40 percent of the active ingredients upon absorption. This bonding action depletes the sanitizer of its germ-fighting capabilities and prevents it from killing the deadly norovirus bacteria by the time it reaches the surface.

Chicopee provides an easy and affordable solution to help prevent these outbreaks with its line of innovative food-service towels. ChixSC Professional Foodservice Compatible Towels are made with a proprietary blend of nonwoven and synthetic fibers that absorb and release the sanitizer onto the surface at full strength. ChixSC been shown to outperform the leading cotton and paper brands by 200 percent when measuring the strength of sanitizer absorbed and released onto surfaces.

And since ChixSC towels are compatible with both quat- and chlorine-based sanitizers, only one type of towel needs to be purchased instead of two, which lead to lower costs. Using one towel also makes it easier and less costly to train employees on proper sanitization procedures.

Effective sanitizing with ChixSC towels will not only make a difference in guarding against deadly outbreaks, it will also prevent food-service establishments from incurring steep business losses and damaged reputations. Costs associated with food-borne illnesses range from $12-$25 billion annually and an outbreak could run into millions of dollars for a single foodservice operation.

Visit www.CHIXSC.com to view a demonstration of the sanitizer depletion/compatibility phenomenon. Visitors to the site can also order free test kits at ChixSC.com and make a direct comparison between the performance of their current towel and CHIX SC.