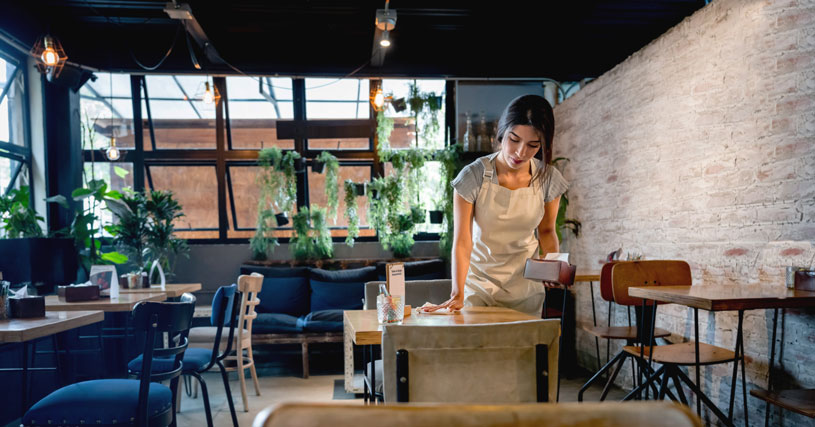 The FDA requires food service establishments to adhere to a sanitation standard operating procedure, or SSOP, which protects the health and wellbeing of customers and employees.

The FDA requires food service establishments to adhere to a sanitation standard operating procedure, or SSOP, which protects the health and wellbeing of customers and employees. Acceptable SSOPs should adhere to the standards set forth by the Code of Federal Regulations, including the safe usage of water on food contact surfaces.[1] Establishments should consider how they clean and sanitize, starting with the type of towel used. Cotton towels chemically bind with the active agent in foodservice-safe sanitizers. As the active sanitizing agent becomes trapped within the towel over time, the liquid displaced onto surfaces will contain a lower than recommended concentration of sanitizer.

Establishments should maintain proper sanitizer strength not only to protect the health and wellbeing of those dining and working, but also to avoid frequent changing of solutions as this can lead to increased expenses and more wastewater. Replacing the solution less frequently can be achieved by using a towel specially engineered to release sanitizer, rather than trapping it.

Chicopee’s sanitizer compatible towels and wipes offer a responsible and effective solution to maintain sanitizer strength for a longer period than standard cotton towels. In a competitive test to measure towel performance, Chix® towels performed better than cotton towels in terms of releasing sanitizer to surfaces and minimizing the depletion of a solution’s strength over time.

The test data shows that the use of a cotton towel alone can deplete the ppm in a quat solution by as much as 50% in a little over one hour. The greatest loss occurs in the first 15 minutes, so the impact is immediate. Chix® chemical compatible towels offer superior sanitizer release to surfaces when compared to a generic 100% cotton towels. Testing shows Chix® Pro-Quat towels release 200 ppm after one hour whereas the cotton towel released only 63 ppm immediately after saturation in the solution. The results from testing also show Chix® SC towels consistently release 200 ppm for as long as 48 hours when used with quat, but the cotton towel only released 52 ppm up to 24 hours after use.[2]